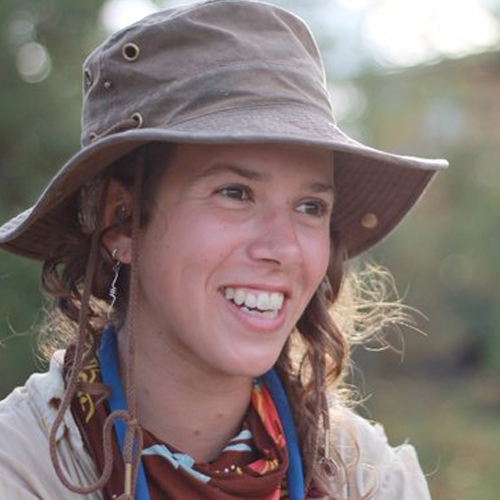 Dalal Hanna, a National Geographic Explorer, PhD. Candidate, and canoe expert, is the perfect fit for the ecologist position on the Magpie River Adventure.

We developed the concept of an ecological guide as a way to bring guests closer to nature. Having an expert on the trip who understands the science behind the Magpie and the Boreal Forest and who can answer questions about the plants and animals they see along the way, is the best way for people to learn about and connect with the surrounding environment.

“The Magpie is a breathtaking place. It’s so remote, beautiful and humbling,” Hanna says. “Rivers in that region are interesting in that they’re these big rivers that are relatively untouched. Most large rivers on earth have some type of human development on them, but the Magpie is one of those pristine ecosystem, large rivers that has been left as we might have found it a long time ago.”

Hanna is a freshwater ecologist in the middle of her doctorate at McGill University. Long before she became an expert in Quebec’s freshwater supply, she was a summer camp kid who explored the waterways of Gatineau, Quebec by canoe.

Her ultimate canoe trip was in 2011 when she and group of friends spent 6 months paddling from Ottawa to Inuvik.

“Our trip across Canada was life changing,” she says. “It was a long journey filled with diverse landscapes and amazing encounters with people, wildlife and nature.”

She returned from the trip, completed her undergraduate degree in environmental science and began a master’s degree in biology. To help fund her research she applied to a National Geographic early career grant. This helped fund her study of mercury levels in fish in Africa. She then turned her focus homeward and began looking at Quebec’s freshwater.

She hopes to share that passion with Boreal River guests. Apart from being able to answer questions about virtually anything guests  see along the river and showing them edible flora, Hanna hopes to impart the importance of watersheds, ecosystem balance, and how forests house incredible stores of carbon and their influence on global climate.